Tomb of Annihilation is an experience module for the fifth release of the Dungeons and Dragons dream pretending game.

Tomb of Annihilation revolves around the Deathcurse, a squandering sickness that gradually kills any individual who’s at any point been raised from the dead and forestalls any individual who has kicked the bucket from being raised, and the Soulmonger relic that caused the infection. “The story of the mission starts with the gathering being employed by Syndra Silvane, a rich previous globe-trotter who is tormented with the Deathcurse. Her sources have followed the Soulmonger to the old wildernesses of Chult. At its center, Tomb of Annihilation follows an exemplary mission structure. The party has a goal, a cutoff time — Silvane is gradually passing on, so every day the party spends investigating carries her nearer to extremely durable demise — and a rambling breadth of hazardous wild holds them up”. This experience module is intended to take player characters from first level to eleventh level. 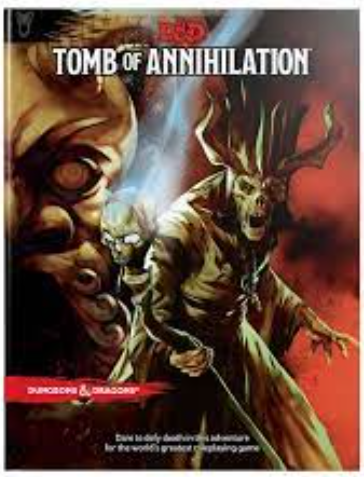 D&D withdraws from conventional wargaming by permitting every player to make their own personality to play rather than a tactical development. These characters leave upon fanciful experiences inside a dream setting. A Dungeon Master (DM) fills in as the game’s ref and narrator, while keeping up with the setting where the experiences happen, and assuming the part of the occupants of the game world.